If you’re looking for the promised “this is spam” option that Google promised with its new Gmail political campaign email pilot program (you know, the program that lets political campaigns sign up to bypass the Gmail spam filter and go right to your inbox), you’re not alone. Oh, it’s there, but it’s hidden.

We first told you about Google’s new “skip the spam filter” program for political campaigns back in July. It was created in response to claims that the Gmail spam filters were favoring one party over the other and also, at least in part, in response to the introduction of a Republican bill at the Federal level that would have prohibited any political campaign email from first being run through spam filters before being delivered to the inbox. While it’s unclear whether the proposed law, dubbed the Political BIAS Emails Act of 2022 (BIAS being short for “Bias In Algorithm Sorting”) would have passed, we’re sure that Google didn’t want to take any chances, and even if fighting the BIAS act was successful it would have cost a lot to mount a defense against it.

It’s also worth nothing that while the Political BIAS act would have applied to all inbox providers, it was really only aimed at Google Gmail, and that’s in part because of allegations of political bias against Google, and even lawsuits such as Tulsi Gabbard’s lawsuit against Google for putting her campaign email in the spam folder, as well as the mischaracterization of a study that was twisted to say that Google was playing political favorites with their spam filtering algorithms. In fact, as we explain here, the study’s lead author categorically denied that, saying that “Our study does not make any such conclusion,” and that there is “nothing in it that demonstrates that someone is deliberately trying to turn the elections.”

Now, in addition to the requirements to participate in the political campaign email program, Google said that for any campaign that participated in the program the first email sent to a Gmail user would feature a big red popup that would ask the user if they wanted to continue to receive the email, unsubscribe, or mark it as spam.

This assuaged many of those opposed to the program, knowing as they did that a lot of the email would be immediately marked as spam, as that’s what political campaigns do: they acquire mailing lists, trade them back and forth amongst themselves, and spam them. This would be a win for the inbox users and it would also be a win for Google, as it would show those campaigns that people simply didn’t want their email; if there was a bias against political campaign email it was with ‘we the people’, not a bias in the filtering algorithms.

So How Do You Report Spam to the Gmail Political Email Program? 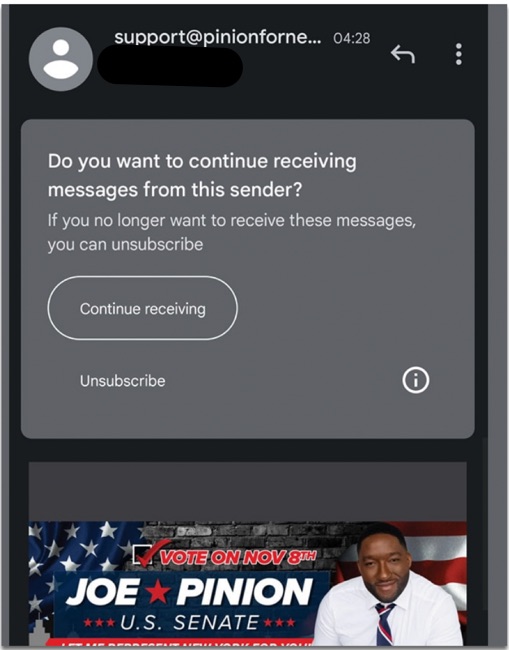 Well, as it turns out, when you click on “Unsubscribe”, here is what you see: 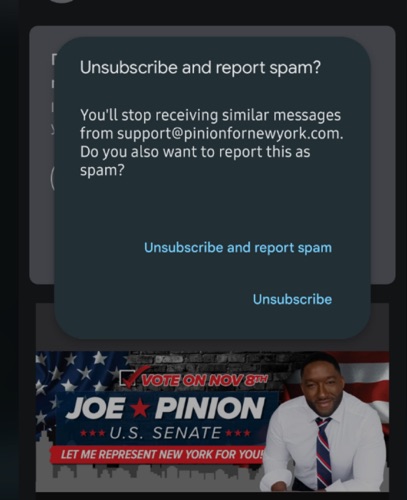 This is both more complicated, and harder to find, than just reporting spam through the regular Gmail interface! The one upside to this is that (presumably) when you report as spam a political campaign email that is part of the Google political campaign email program, it’s getting back to Google and the sender in a more ‘in your face’ fashion. At least, we can hope.

But wait, there’s more. The colleague who received the spam in the above screenshots, and make no mistake, it is truly spam, is not even a registered voter in the U.S.. In fact, they couldn’t register to vote in the U.S. if they wanted to. Because they are a citizen of Scotland. Living in Scotland. Having at no time ever registered for anything political in the United States. Oh, and the Gmail address to which this spam was sent, unfiltered because Mr. Pinion participates in Gmail’s “bypass the spam filter” political campaign email program, was made up by either Mr. Pinion’s campaign or whomever provided the email address to them, having as it does a “.” inserted into the recipient’s Gmail username which the recipient has never done (for those who aren’t familiar, inserting a “.” anywhere into the username (the left-hand side of the @ symbol in the Gmail email address) is ignored by Gmail and will be delivered to the inbox just as if there were no dots inserted into the username).

All in all, at least so far, an idea that could have done something great, but so far isn’t.

People who viewed this article recently: 79