Google’s Gmail Verified Sender Pilot Program for political campaigns is up and running, and political campaigns can now apply to be part of Google’s program which allows political campaign email to bypass the spam filter and be delivered directly to Gmail users’ inboxes, but only once unless the user doesn’t click on the big red “I don’t want this” message that will accompany it.

Last month we told you about an effort by some members of Congress to introduce a law that would require email inbox providers such as Gmail, Outlook, Yahoo, and all the others, to deliver political campaign email directly to your inbox, and that would actually forbid political campaign email to be run through a spam filter first. That law, if passed, would be called the Political BIAS Emails Act of 2022 (BIAS being short for Bias In Algorithm Sorting). The Email Bias act as introduced is known as HR 8160 and SB 4409.

Why a Pilot Program for Political Email Campaigns?

At the same time, and perhaps in response to the introduction of the law (in fact likely in response to it, although we’ll never know), Google wrote a letter to the FEC (Federal Election Commission) asking whether a pilot program contemplated by Google would be acceptable to the FEC, or would it run afoul of election law and FEC guidelines? The gist of the proposed pilot program was that certain vetted, verified, registered political campaigns could apply to be part of a program which would allow them to bypass the spam filtering algorithms at Gmail and instead be placed directly in the inbox, with the express proviso that the first time their email was placed in the inbox there would be a big pop-up that asked the user whether they had signed up for the campaign’s mailing list, and did they want to unsubscribe, and did they want to report it as spam?

And while it may or may not be the case that Google’s request was in response to the introduction of the Political BIAS Emails Act of 2022, we do know that both the introduction of the act, and Google’s pilot program, were in response to a study which found that certain campaigns had better inboxing rates than others. What it did not say, but what it was spun as saying, was that Google was playing favorites when it came to which political campaigns’ email made it to users’ inboxes and which political campaigns’ email was identified as spam and sent to the spam folder. You see, Republicans seized upon the study, declared it showed a left-wing bias against Republican campaigns, and thus the Political Bias act was born.

But, says the study’s authors, their conclusions were wildly misrepresented. In an interview with the Washington Post, lead author of the study Muhammad Shahzad said “Our study does not make any such conclusion,” and reports are that the study’s authors are pretty upset by the mischaracterization. In fact, says Shahzad, there is “nothing in it that demonstrates that someone is deliberately trying to turn the elections.”

In any event, and almost certainly as an end-run against any chance of the proposed legislation being passed, and in an effort to keep control of their own system rather than having rules rammed down their throat by the Federal government, Google has created, and now opened for application, their pilot program.

And we have to say that they have done a pretty good job of it. For one thing, it’s pretty hard to get accepted into the pilot program.

Be actively registered with the U.S. Federal Election Commission during the 2022 election cycle as one of the following (“eligible participants”): An Authorized Candidate Committee; A Political Party Committee; or Leadership Political Action Committee

Submit domains for participation that have been active for 30 days prior to applying to the Program Pilot. The domain must regularly send bulk emails from the domain. Eligible participants should only submit domains that send email campaigns at least every 14 days.

For another, their email quality and best practices requirements are surprisingly strong.

Strongly Authenticated with aligned SPF & DKIM: SPF and DKIM must be implemented, and the SPF/DKIM authentication domains must match and be aligned with the sending domain that’s verified in the program.

No attachments: Messages must not include attachments. Bulk emails may include inline images.

But the following is by far our favorite part, in fact we’re going to put it in bold because we like it so much:

“Do not send spam, including unsolicited, repetitive, nonsensical, or unrelated commercial content. Follow guidelines for sending messages to Gmail users. Please keep in mind that your definition of “unsolicited” mail may differ from your email recipients’ perception. Exercise judgment when sending email to a large number of recipients, even if the recipients elected to receive emails from you in the past. See more about bulk email best practices. In the Program Pilot, having more than 5% of emails in a day “Marked as spam” by users will be a violation of the Program Pilot’s Spam policy.”

Now some people are saying that 5% or more of their email being marked as spam is too large a percentage, it will never happen. But then, you really need to consider the source – i.e. political campaigns who are notorious for spamming, and spamming a lot, and annoying a lot of people. 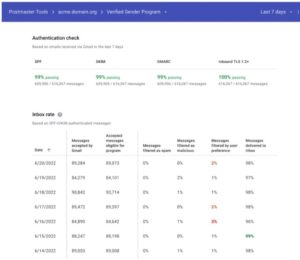 There are only the highlights, you can read more about the pilot program here, here, and here, and you can apply to be part of the program here.

People who viewed this article recently: 214