by Get to the Inbox Team |
First Published: November 9, 2021 |
Last Updated: November 12, 2021
Save or Share
[Prefer to listen to the audio blogcast? Listen on Apple, Spotify, Google or Anchor or say "Alexa play the Everything Email Marketing podcast"]

There’s a reason that email hygiene services are so popular: following regular email list hygiene best practices not only keeps email deliverability from tanking, but will also boost your list’s performance to the moon! Regular mailing list maintenance gives you amazing open and click-through rates, and not just because you’ve removed the dead wood. So many email senders who know that they should follow email hygiene best practices often just can’t bring themselves to abandon inactive subscribers. However, once you realize just how incredibly responsive a leaner, meaner list can be you’ll not only want to perform mail hygiene maintenance regularly, you’ll actually look forward to it, because it’s the secret sauce that will keep you ahead of your competition. We call this secret sauce “compounded deliverability”.

Here’s the thing: it’s common sense that removing non-openers from your list will give you an immediate boost in terms of the open rate and click-through rate (CTR) percentages. After all, if you have 1000 people on your list, and 50 people are opening your email (an abysmal 5% open rate), and then you remove 400 people because they are not opening your email, now your list has 600 people on it, and so when those same 50 people open your next mailing, that’s a 8.3% open rate. In a way, that’s an artificially enhanced new open rate.

Here is an actual example of someone we worked with just this month. They have a mailing list that had 9,600+ email address on it, all built with double opt-in (also known as confirmed opt-in), so they were really loathe to purge any email addresses, no matter how long it had been since the email address had actually opened, let alone engaged with, their email. As you can see, their open rate was in the 18th percentile, with a click-through rate of less than 1%.

In terms of actual numbers, they were routinely having about 1,800 people open their email, and between 50 and 90 people click through.

We had them remove all of the email addresses that had not opened in the last 90 days (when you do this, it’s fine to reach out to those email addresses in a re-engagement campaign, but if you get no response from that, it’s time to say goodbye to them permanently, they are only hurting you). This resulted in the removal of a bit over 2000 addresses (2053 to be exact). This cut their list size by more than 21%! But they were ruthless, and did it, and it was so very worth it!

Just 3 days later they sent to that exact same list, minus the 2053 non-openers. Now, if you were applying straight math to this list, you would expect that about 1,800 people would open the email to the newly trimmed list, and that roughly 50 to 90 people would click through. It’s nice that the list is a recipe list, because it means that each email is essentially the same, it’s a recipe, meaning that results can’t be thrown by one email containing a different offer, or sale, from the others. So, remember, logically you might expect about 1,800 people to open the email, and 50-90 to click through, as that was the pattern prior to getting rid of the non-opening email addresses. Again, just 3 days later. 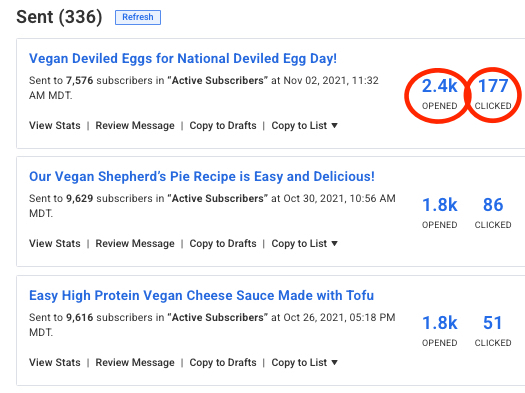 Most, if not all, email service providers (ESPs) allow you to determine who has and who has not opened any email from you within a specific time slice, or before a certain point in time. They also allow you to create segments based on those same metrics, so that you can send a re-engagement campaign to the non-openers, and only send your regular mailings to those who are engaged.

If you’ve been putting off your mailing list hygiene for way too long (as so many do), hopefully this has given you the push that you needed!

We use cookies on our website to give you the most relevant experience by remembering your preferences and repeat visits. You can set what cookies we use by clicking "Settings".
By clicking “Accept” OR by scrolling or remaining on the site you consent to the use of ALL the cookies.
We don't sell any data but we are required by law to display this link: Do not sell my personal information.
SettingsAccept
Display GDPR, Cookie & IP Address Policy

This website uses cookies to improve your experience while you navigate through the website. Out of these, the cookies that are categorized as necessary are stored on your browser as they are essential for the working of basic functionalities of the website. We also use third-party cookies that help us analyze and understand how you use this website. These cookies will be stored in your browser only with your consent. You also have the option to opt-out of these cookies. But opting out of some of these cookies may affect your browsing experience.
Necessary Always Enabled
Necessary cookies are absolutely essential for the website to function properly. This category only includes cookies that ensures basic functionalities and security features of the website. These cookies do not store any personal information.
Non-necessary
Any cookies that may not be particularly necessary for the website to function and is used specifically to collect user personal data via analytics, ads, other embedded contents are termed as non-necessary cookies. It is mandatory to procure user consent prior to running these cookies on your website.
SAVE & ACCEPT
More from Us
This One-Click Unsubscribe Law is the #1 Email Law that People Get Horribly Wrong
Free stuff!
Close