It all started back in the summer of ’03. Our founder and CEO, Anne Mitchell, had recently left her position as in-house counsel at MAPS, the first anti-spam blacklist, and had been brought in as CEO of Habeas, a startup that originally was intended to fight spam by using copyright and trademark law. The way it was supposed to work was that email senders would license a special set of email headers from Habeas, which only they were allowed to include in the email that they sent, and then the inbox providers and spam filters would allow email bearing those headers to pass to the inbox. Of course, spammers would copy those headers and use them too, and then, the theory went, Habeas would sue them for copyright and trademark infringement. Anne was brought in because she was highly respected in both the email receiving community (ISPs, inbox providers, and spam filters) and the relatively new commercial email sending community (email marketers, etc.).

Anne ultimately left Habeas after a year, because the board at Habeas was becoming more concerned with revenue than doing the right thing, and so were becoming less concerned about who they were certifying. However while she was there, and because she was regularly in communication with both the email senders and the email receivers, she came to realize that while they believed themselves to be at odds with each other, both sides actually wanted the same thing: to have wanted email delivered reliably to the inbox, and, as importantly, to not have unwanted email delivered to the inbox.

Shortly after Anne left Habeas and founded ISIPP, the commercial email senders and the inbox providers and spam filters started approaching her, asking her to have ISIPP offer an email reputation certification service, to assist with deliverability. The only reason they had signed on with Habeas, they said, was because they trusted Anne, and they wanted Anne’s organization, ISIPP, to provide the service. And that is how and why SuretyMail by ISIPP (later renamed to Get to the Inbox by SuretyMail) was born.

While Anne was at Habeas she became painfully aware that the senders that needed help the most were also usually the ones who could afford it the least. This included small businesses, and even newsletter businesses. She was determined that anybody who needed help should be able to afford it, and that is why to this day SuretyMail has a unique pricing structure that is based not on volume, but business model. It’s also why our service is month-to-month, all-inclusive, and comes with a money-back guarantee.

As a side note, the service that would eventually be known as Return Path (and then ‘Validity’) was started at exactly the same time as SuretyMail. A gentleman named Scott Weiss had left Hotmail, and started a business providing a very fast, high capacity new email sending appliance. That business was called IronPort. IronPort’s customers found that the email receivers were blocking their email, primarily because the receivers had never seen such massive amounts of email flooding their system, and so assumed that it must be spam. So IronPort created their Bonded Sender program, in which IronPort put up a cash bond, and told the inbox providers that if they ever found spam to be coming from one of IronPort’s customers, IronPort would donate that cash bond to the charity of that inbox provider’s choice. Bonded Sender was eventually spun off as a separate business, which then became Return Path. And as a side note to the side note, Habeas went under and its assets were acquired by Return Path. Return Path was acquired by Validity in 2019, leaving SuretyMail by ISIPP as the remaining original email deliverability company and service.

And now you know. 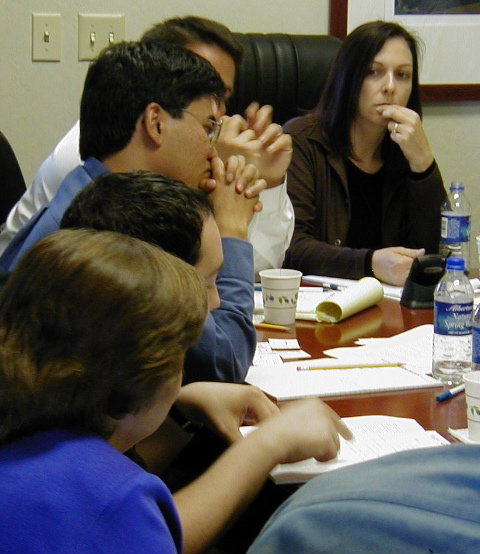 “Email Marketers, ISPs Vow More Communication”
E-mail marketers and Internet service providers agree on steps to cut down on the collateral damage in the spam war. 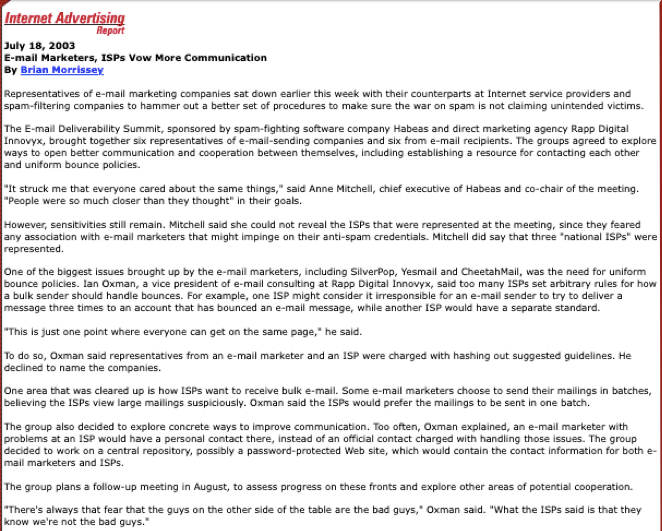 “Anti-Spam Forces Prepare For Second Summit”
Round two of discussions between ISPs, anti-spammers, and e-mail marketers kick off next week in Silicon Valley. 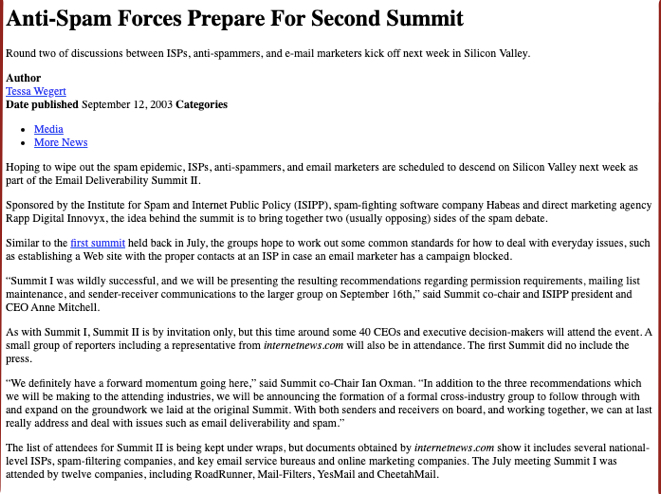 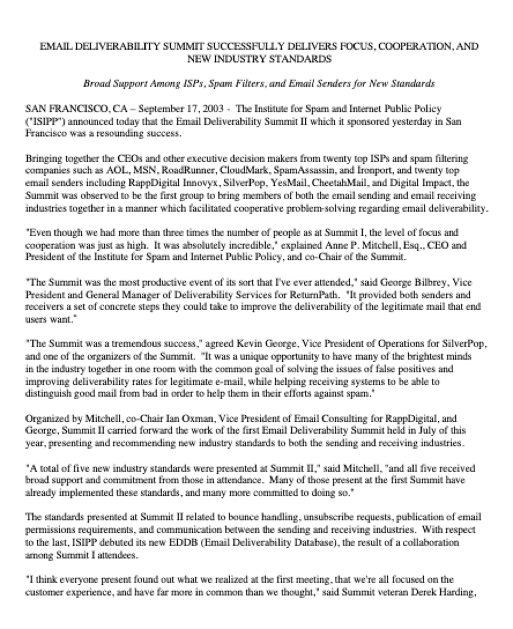 This website uses cookies to improve your experience while you navigate through the website. Out of these, the cookies that are categorized as necessary are stored on your browser as they are essential for the working of basic functionalities of the website. We also use third-party cookies that help us analyze and understand how you use this website. These cookies will be stored in your browser only with your consent. You also have the option to opt-out of these cookies. But opting out of some of these cookies may affect your browsing experience.
Necessary Always Enabled
Necessary cookies are absolutely essential for the website to function properly. This category only includes cookies that ensures basic functionalities and security features of the website. These cookies do not store any personal information.
Non-necessary
Any cookies that may not be particularly necessary for the website to function and is used specifically to collect user personal data via analytics, ads, other embedded contents are termed as non-necessary cookies. It is mandatory to procure user consent prior to running these cookies on your website.
SAVE & ACCEPT
Free stuff!
Close
Skip to content